I’ve been reluctant to jump into wearables. One reason: I already have so many things to charge before bed, do I really want another? As much as I love technology collecting all these gadgets can really add up, so I try to slow play myself by focusing on why I don’t need one for awhile. I did that with my first smartphone purchase even. I hung on to an iPod for a few years and used that as a supplement to my Sony Ericsson device. It worked for awhile but ultimately I caved and took the plunge. 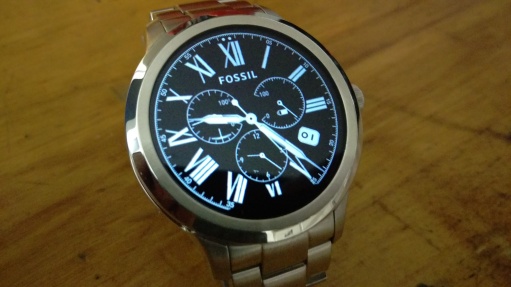 This time that plunge into the smartwatch world can be attributed to my wife since she gave me a Fossil Q Founder as a birthday gift. She pushed me off the ledge. Let me start by saying, I really enjoy collecting watches. I’m not much of a jewelry guy, but I definitely have a sweet spot for watches. In fact, many of the watches I’ve owned over the last twenty years have been Fossil watches.

So when Fossil announced that they were releasing a smartwatch, they had my attention. I originally had my eye on a Moto 360, being an Android user. I like the idea of a classic looking round watch versus the square look of the first Samsung Gear and the Apple watch. The other real draw to the Fossil watch was that this was a smartwatch made by a watch company.

At first sight it has you as a stunning watch. I’ve been stopped many times and asked about it in the last few weeks. Once I had the band fitted properly, it has been incredibly comfortable and doesn’t feel much different than my other Fossil timepieces. I should note that the watch has to two options, a metal band or a leather band. Interestingly enough, if you opt for the less expensive leather band option you will not be able to buy the metal band later.

Fossil has done solid job with their app as well. They offer 4 customizable faces that can be altered on the watch or through the app. The Fossil Q works with iOS and Android, but it is far better suited for an Android user. Android Wear brings even more face options to the table. The options are virtually endless, but I’ve already settled in on a few favorites.

The watch itself is a 42mm stainless steel face. The backside is polycarbonate to allow for wireless charging via the display mount. It has a microphone located on the left of the face and a dial that functions as a button on the right. The microphone allows me to respond to text messages, social media, and ask Google questions. I have my watch set up so that movement of my wrist will activate the display. With a twist of the wrist I can scroll through multiple notifications. It comes in quite handy when I have a few to scroll through, such as email, text messages, Instagram likes, Twitter mentions, and Google plus activity.

With all those notifications running, you might be asking yourself about the battery life. Well it serves me well for a full day, but I wouldn’t push it much farther than that. I set it on the charger before bed and easily make it through each day. It seems to charge relatively fast and connects easily.

All in all the device is well made. It looks great and is comfortable to wear throughout the day. Android users will get more functionality out of the Fossil Q Founder than iOS users. But if you’re not a fan of the square Apple watch, the Fossil Q with its classic round face may be a better fit. The stainless steel face works well with the many band options Fossil provides, so you can find the right combination for you. 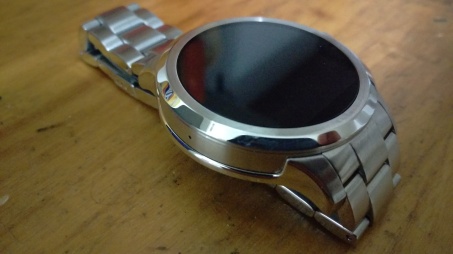